Monodéndri is located at an altitude of 1100 m, and is one of the most beautiful and representative villages of Zagoria. Along with the neighboring Vitsa are a matchless residential ensemble expresses characteristics of traditional architecture of Zagoria and of Epirus in general. All the villages of Zagoria are equally beautiful, with its own peculiarities in each of them.

Monodéndri was built around 1360 AD Among the villages Vitsa and Monodendri, next to a public road,and was discovered in 1965 as the first known village of Epirus with two cemeteries. The rich finds are exhibited in the Archaeological Museum of Ioannina.

Monodéndri has 7 churches. The oldest of these are: the monastery of Agia Paraskevi, 1412 AD, Saint Minas,1625 AD, the monastery of the Prophet Elias
1664 AD and the central church of St. Athanasios, AD 1801.

Monodéndri is the hometown of the great national benefactor brothers Manthos and George Rizari, who gave their fortune that they have acquired in Russia, establishing institutions and through the creation, in 1844, of the homonymous historical Church School in Athens, with the great offer today in the Orthodoxy and the Education of the Nation. Today Rizarios Institution ministers at the same time to the development of the birthplace of the Rizari Brothers and the wider region of Zagoria.

From Monodéndri came also the "father of the Greek agriculture 'Spyros Chassiotis, the first mayor of Athens John Koniaris, the founder of pediatric science in our country Anastasios Zinnis, the great Hellenist Dimitrios Semitelos and other eminent men. 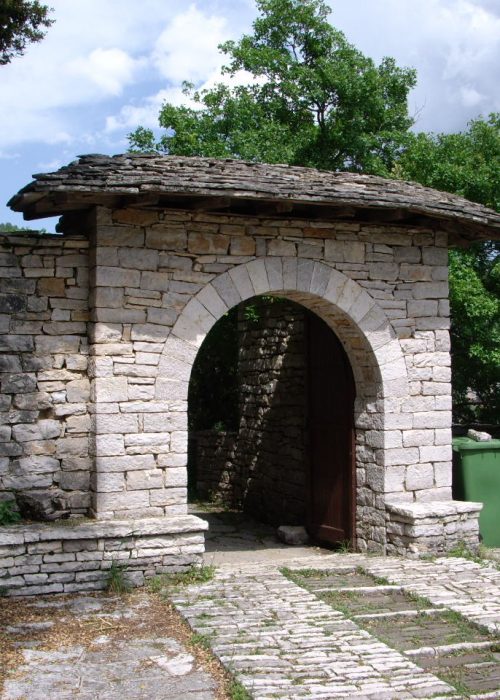 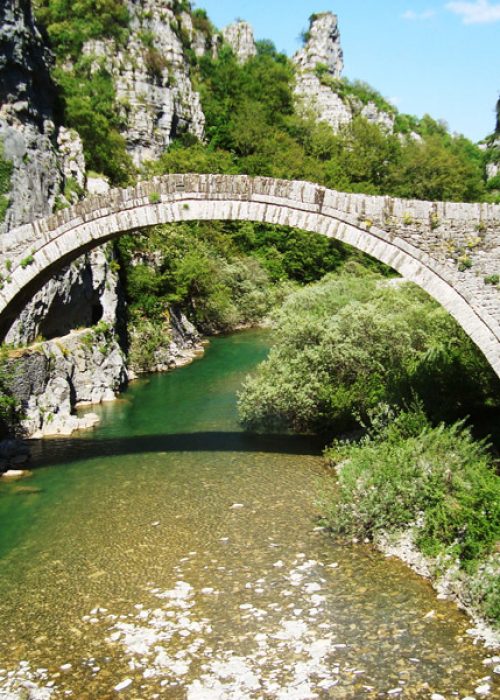 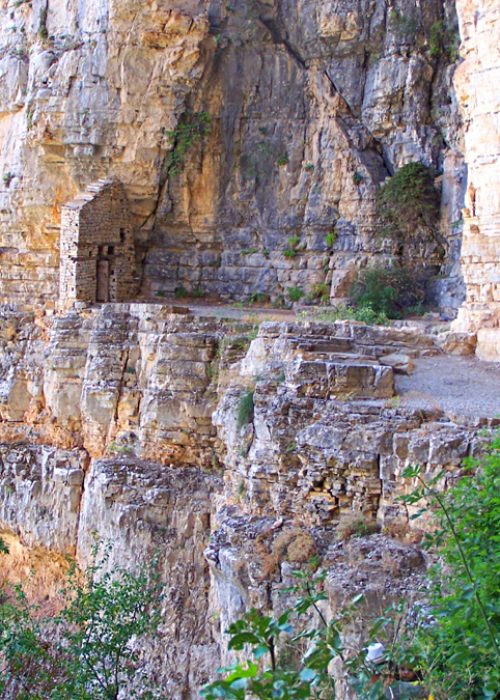 The Vikos Gorge
The famous Vikos canyon extends over a length of 12 kilometers and has been recorded in the Guinness Book of Records as the deepest in the world (1,350 m, the maximum height of the rocks from the riverbed). Through it runs Voidomatis, a tributary of Aos, forming in the path unrivaled beauty landscapes. From Monodéndri can anyone enjoy some of the most spectacular and fascinating views, from the following three broad positions (locations).

Monastery of Agia Paraskevi
The route starts from the central square of Monodendri, has a length of 800 meters and intersected by a sophisticated path. On the left side of the Monasteryare located "The houses”, which are hideaways of the locals during the tourkish and albanic raids of past centuries. Todays residues are the traces of wooden bridges, some derelict walls with battlements and a small chapel, where the more adventurous men descended into the ravine to carry water in in the caves for the excluded women and children.

Oxia
With the most spectacular views of the gorge. The route starts from the upper square of Monodendri consisting of 6 km macadamized road, which passes through the unique Petrodasos (map position 7) with the mythical giant formations of shale rocks

Grunia
In this location can anyone reach starting from the central square of Monodendri, behind the church of St. Athanasios. This route, where it joins the Outdoor Amphitheater of Monodendri "Angelos Kitsos" also leads through cobbled path, in the watercourse of the ravine of Vikos (march approximately one hour). The route through the ravine leads in the villages of Vikos and Papigko.

This website uses cookies to improve your experience while you navigate through the website. Out of these cookies, the cookies that are categorized as necessary are stored on your browser as they are essential for the working of basic functionalities of the website. We also use third-party cookies that help us analyze and understand how you use this website. These cookies will be stored in your browser only with your consent. You also have the option to opt-out of these cookies. But opting out of some of these cookies may have an effect on your browsing experience.
Necessary Always Enabled
Necessary cookies are absolutely essential for the website to function properly. This category only includes cookies that ensures basic functionalities and security features of the website. These cookies do not store any personal information.
Non-necessary
Any cookies that may not be particularly necessary for the website to function and is used specifically to collect user personal data via analytics, ads, other embedded contents are termed as non-necessary cookies. It is mandatory to procure user consent prior to running these cookies on your website.
SAVE & ACCEPT